The weather was rather uncooperative this past week so I have no updates on my adventures in learning how to make old, ugly furniture new again.  That said, we still accomplished plenty!

My first update relates to the plumbing.  The new septic is in and the company that did the work even re-seeded our lawn!  On their last day, while they were still cleaning up, Carl and I made ourselves mimosas and went to the side yard to chat while his mama was in the shower.  As we came around the corner of the house, I noticed water just bubbling up out of the ground!  At that time, we both thought they may have burst a water pipe with their heavy equipment, but no, in fact, it was a very old school system in which the grey water was piped into the yard and ONLY toilet water went through the septic system at all!  Ew.

Luckily, we noticed while the work was still in progress and once the issue was discerned, they scheduled a plumber to run all draining water through the septic system.  When he came out last week, we decided to go ahead and ask him about an issue that had been confounding us from day one:
Why is it that our toilet occasionally refills with hot water?

Now, I don’t know about you, but until living here, I had never once seen hot water in a toilet.  But sure enough, every once in awhile, we’d flush and steam would billow out of the bowl!  Also, it was hard to tell which valves were for hot and which were for cold on all of our sinks because it seemed all of them would go from cold to hot and back again!  Very strange.  And when we asked, judging by the confused/concerned look on the plumber’s face, I’m pretty sure he thought it was very strange as well.  He agreed to take a look and went on down into the basement.

Turns out, there is a little thing called a “sweat valve” that can be placed near the inlet to the toilet and if the water is cold enough to cause condensation on the tank, it will automatically mix in some hot water.  However, on our house, instead of using an actual sweat valve, there was a two-way, manual valve that just mixed all hot and all cold together for everything.  Thankfully, all it took was removing said, manual valve and we had normal, separate hot and cold water throughout!  Oh the things we are learning as we dig into this awesome, crazy, old house!!!!

Some of you may recall that we bought furniture and it was delivered a couple weeks ago but the delivery guys said it couldn’t be moved in because it simply would not fit unless we took it through the window.

Well, our ancient windows don’t just open up. I’d have to get the drill and literally remove the whole thing in order to do what they wanted.  Also, because they would not touch anything but the furniture under any circumstances, it wasn’t going to happen because even if I got the window unscrewed, I could never have safely gotten it down without another pair of hands.  I suggested we take the doors off the hinges and they said that wouldn’t work.  Needless to say, I was not impressed with them and even though I was pretty sure the furniture would fit, I decided I’d rather not have them try because they clearly weren’t interested in doing a good job.  So I had them take it to the barn where Carl and I could fetch it later.

Later turned out to be this past Saturday.  And, with just a few doors off the hinges, we managed to get both the couch and the chaise in-in no time!  I won’t say it was easy, but it was definitely easier than “Tweedle Dee and Tweedle Dum Delivery Services” made it out to be.  : ) 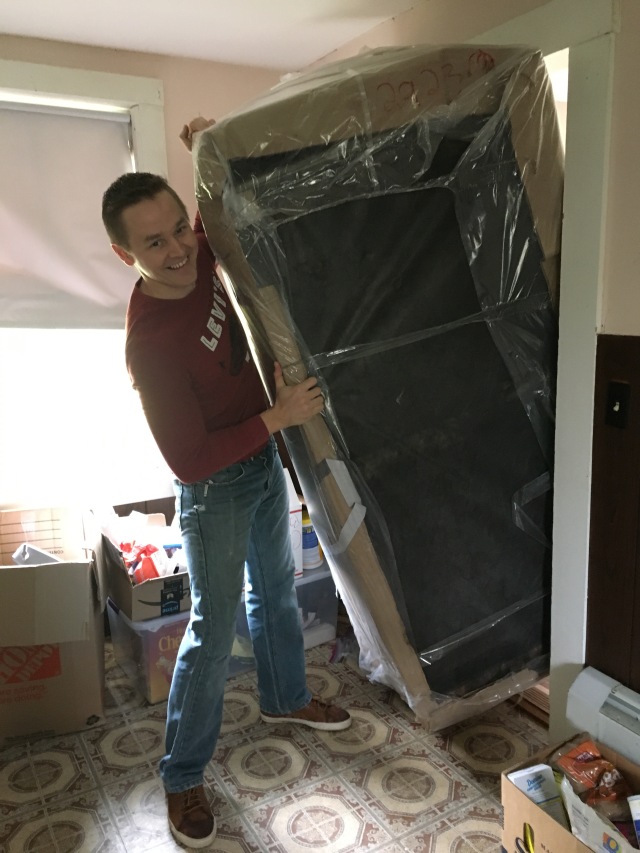 So now we have a couch!  And a chaise!  And after five months with no furniture other than a bed and a dining room table, it feels soooooooooooooo good!  : )

The weather is supposed to improve drastically starting tomorrow, so we’ll hopefully be able to get back to sanding and painting shelves and such for the laundry room/pantry this week.

Carl and I played a neat game this past weekend and I thought it would be fun to share it with all of you!  The game has no rules and there are only two parts.  Part One is called: What is that smell?  And Part Two is called: And where is it coming from?

We decided to play while in the middle of puttying the floors upstairs.  I came down to get something (I honestly have no recollection what it was now.)  and I smelled the most horrendous smell in our downstairs hallway.  My first thought was natural gas which completely freaked me out as my sweet Sunshine was sleeping in the next room.  But when I had Carl come down to give it a whiff, he said he’d smelled it faintly earlier and thought it was wet towels we’d forgotten to wash once we got our washing machine hooked up.

I informed him that the bag of wet towels we brought from the apartment was the first load of wash I had done when we got our washing machine hooked up and his brow crinkled in concern.  If not the towels and not natural gas, what could it be?  We noted it was much stronger at one end of the hall than the other and put part one of the game on hold to focus all of our attention on part two.  After sniffing and wandering for about five minutes, we pinpointed the strongest odor in the master bedroom (which is currently filled to the brim with boxes of our things.

It was at this moment, we both paused, looked at one another, and gave voice to our deepest fear: what if a squirrel died either in the walls or in one of our boxes of things?  The smell was certainly rank enough and that would explain why it had progressively gotten worse on a hot day . . .

Continuing on with our search, I noted how close we were to the half bath off the master bedroom and on a whim went inside.  I won’t say the smell got worse so much as it changed in an odd way that made me curious.  So I went to the toilet, which we have never used, lifted the lid . . .

And there it was.  The bowl was coated in blackish-green slime and there was no water.  The septic had backed up!!!!!! EW. EW. EW. EW!  As luck would have it, I had recently received a recommendation from our good friend Bri on a fantastic bleach/lysol toilet bowl cleaner.  I literally ran to retrieve it from the bathroom we have been using and liberally applied it.  Even though it says you don’t have to scrub, we scrubbed, we let it sit, and then, with a touch of fear in our hearts, we flushed.

It all went down leaving a sparkling clean, white bowl free from wretched odors!  And so ended our game, may we never have to play it again as long as we live.  : )

Even as I type, the guy who is putting in a whole new septic system (the sellers are putting it in because the old one was not up to code) is outside, hard at work!  And not a moment too soon.  : )